Alexander J. Schwarzkopf has composed music since the age of 12. As a result of several years of studies in improvisation, Alexander gravitated towards composition as a means of expressing his ideas in a more rigorous, organized format.

Alexander has composed works for solo piano, chamber music for cello and piano, piano trio, songs for original theatre productions and music for piano and dance. Alexander also composed his own cadenzas for Beethoven’s Piano Concerto No.4, Op.58. He has been a featured composer for the “Mad Hatter’s New Music Series” in Cambridge, MA, “Soundbytes” in Eugene, OR and Festival for Moving Arts in Walnut Creek, CA.

Alexander has worked with William Wood in Albuquerque, John McDonald in Boston, Robert Kyr in Eugene and has received commissions from artists such as Bill Evans and Digby Wolfe. He has also participated in masterclasses with the late Kurt Schwaen at the DTKV Music Festival in Heek-Nienborg, Germany and Martin Bresnick of Yale University at the Oregon Bach Festival Composer’s Symposium in Eugene, OR. In 2008, Alexander gave the Germany premiere of his piano pieces “Kaleidoscopes” at the DTKV Music Festival and the premiere of “Dialogues” in Eugene, OR. 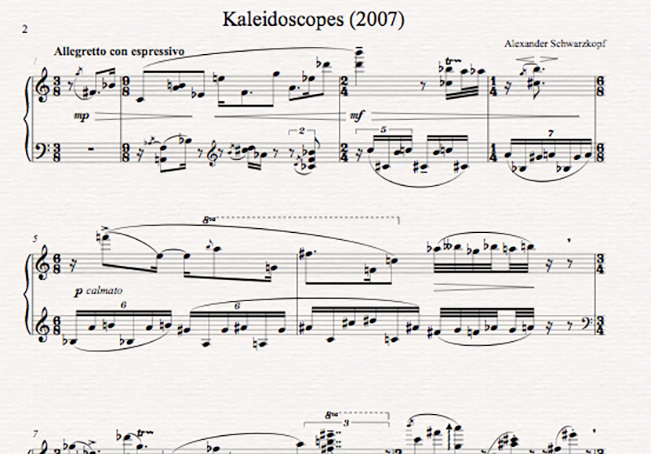